Plans submitted for housing development on the former Bowbridge Garage Site, on behalf of CWC Group.

Matthew Montague Architects have submitted a full planning application for the redevelopment of the former Bowbridge Garage Site on the Ashbourne Road, Derby.

The Bowbridge site is a former petrol station and café which has been in decline for a number of years. The petrol station ceased trading in 2013 and has been unoccupied since; the café has also struggled to remain open. There is also a small bungalow and a successful MOT garage; however the garage requires significant enhancement to continue functioning effectively.

The plans to redevelop the site include the demolition of the existing bungalow, café, petrol station and garage and the proposed plans are for the construction of a new garage and 22 new homes.

The master plan has been developed to maximise the potential of the brownfield site in a ‘farm building’ style. The proposed new houses will be a mixture of two and three storey detached, semi-detached and terraced houses, offering accommodation with a mixture of 3, 4 and 5 bedrooms. Initial consultations with Amber Valley Borough Council regarding the potential for the site proved positive.

The pre-application submission was viewed favourably as it was felt that it offered attractive housing on an unattractive brownfield site within close proximity of good service routes and local amenities. The proposed scheme to retain employment on the site, in terms of the new garage was also viewed positively.

Extensive consultations have also been undertaken including geo-tech, heritage, Landscape visual impact and ecological surveys to fully consider the impact of the creation of the 22 new homes and MOT service garage.

We expect to hear a decision from the local authority planning department mid-2018.

Matthew Montague Architects in an award winning architect based in Derby, UK. If you would like to contact us about any current or future projects call us on 01335 330510 or email matthew@matthewmontague.co.uk 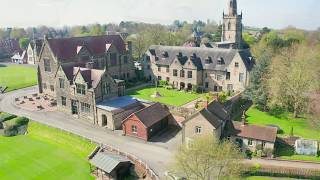 Video of Repton School as it is today.